The human body consists of 75% of water during infancy, and as we grow old, the water percentage in our body declines to 45%. With this amount of water present in the body, a person would think that a few more liters of water in the body will have no negative effects on the body. However, the homeostatic balance of our body is slightly more delicate and complicated as compared to what we think. Excess of water in the body can lead to Hyponatremia, also known as hyper-hydration and water intoxication.

Hyponatremia or hyper-hydration is a body’s state where the water level in the body is disturbed due to excess water retention, and this imbalance in the water level of our body affects our health and may cause stroke, coma, and death in severe cases. 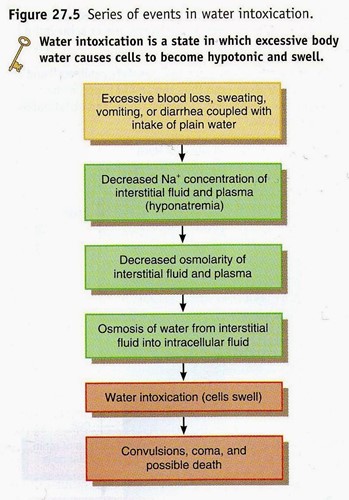 The process of water intoxication

The term Hyponatremia is derived from its Latin and Greek roots and translates to insufficient salt in the blood. In this condition, the excess level of water present in the body causes the dilution of salt and electrolytes to a point where they are not functional. The loss of salt and electrolytes in the body disrupts the normal functioning of our kidneys and causes severe physical problems. There are different types of Hyponatremia:

The process of detecting hyponatremia is hard as compared to other diseases. The biological reason behind this disease is based on the abnormal retention of water because of several neurological and gastrointestinal problems. The excess amount of water present in the body dilutes the electrolytes and salt to a weak concentration. The cells in the body are forced to absorb this water to restore the concentration of electrolytes. The inflammation of cells in the body continues till the time the swelling reaches the brain cells, which causes cerebral edema resulting in strokes, coma, or death.

While the main reason behind this condition is the over-retention of water, multiple mental and physical factors can also lead to its occurrence. The biggest risk of water intoxication is among people who are suffering from depression and schizophrenia. People suffering from depression often have recurring suicidal thoughts and they might consider over-consumption of water. Schizophrenic patients, on the other hand, are at a higher risk of getting affected by this condition because of their inability to think and react clearly. A person is likely to get affected by this disease if they are taking any medications like antidepressants, diuretics, etc. These medicines decrease the sodium level in the blood while they are being used to treat other symptoms of a disease.

Some other conditions that might lead to water intoxication are:

Some medical conditions and medicines also cause overhydration in the body by making your body hold more fluids. These are:

Some medicines and conditions that increase the water intake by making you thirsty: 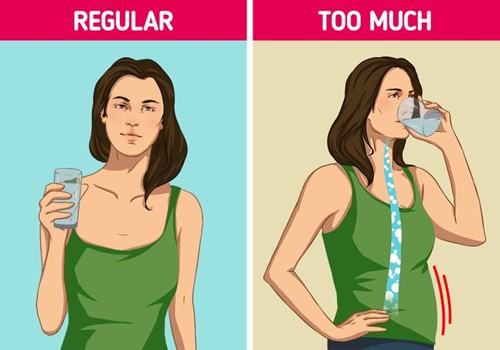 The first symptom of water intoxication is always nausea as we face a problem in holding more than the average amount of water. After this, a person faces slurred speech, weakness, headache, bloating, and hallucination as the body fails to excrete the excess amount of water. At this point, the person starts to lose his ability to think clearly, and the person starts drinking more water in a crazed state. After this, the excess water in the body starts affecting the brain cells causing swelling in them. This condition is known as cerebral edema. The human skull acts as a cover for the brain, and as the swelling increases, it increases the overall pressure on the brain. Due to the increased pressure, the body soon shuts down in a coma or experiences severe seizures that eventually lead to death.

Diagnosis of the condition

While it is hard to discover this condition in its early stages, the diagnosis of the condition is done by monitoring the level of body fluids to understand the disruption caused in the body. Apart from this, a patient’s medical history is also examined to look for any instances of prolonged vomiting, excessive sweating, previous blood tests, and urine tests. The treatment for this condition depends on the amount of excess water a person has consumed as it would be important to figure out the imbalance in the body and what all body systems have begun to fail.

The goals of the treatment of water intoxication are:

There are several ways in which this condition can be treated. In cases of early detection, treatment is done using IV fluid that contains electrolytes as it restores the normal salt concentration in the blood. This can also be treated by consuming salty foods. Treatment for more severe cases is done by using vasopressin receptor antagonists that stop the release of vasopressin from the posterior pituitary gland. With this, the amount of vasopressin impacting the kidneys is reduced, helping the body to conserve less water and allowing the excess water to be naturally excreted.

Asymptomatic Cases: For asymptomatic patients, the treatment is initiated by giving a 3 percent saline 50 ml bolus so that the concentration of sodium remains steady in the body. Further, the patient must be monitored for signs and symptoms to measure the serum sodium concentration every couple of hours.

Symptomatic Cases: Patients who are acutely hyponatremic and complain about increased intracranial pressure should begin their treatment with a 3 percent saline 100 ml bolus, with 2 additional 100ml doses, where each bolus is infused after every 10 minutes, in case the symptoms persist.