Home
Science
How Lightning Created Antimatter in the Atmosphere?
Prev Article Next Article

Nature is calming, relaxing, mesmerizing, and terrifying. One can even say it is these two aspects of it that make it so fascinating, gentle breeze on a summer evening in a garden is as close to heaven as one can get, while times like lightning strikes with a loud bang during thunderstorms feels nothing short of torture. Speaking of thunder, though lightning is awe-striking it can actually produce antimatter in the atmosphere up in the sky. But what exactly is antimatter? and how does lightning create it?

First, this concept was theorized in 1928 by physicist Paul Dirac, where he combined quantum mechanics with the theory of relativity to understand and present a fulfilling description of an electron. According to this equation, for an electron, there must be a positively charged particle which later was called a positron. Then finally in 1932, evidence of it was found in a cloud chamber by Carl Anderson. 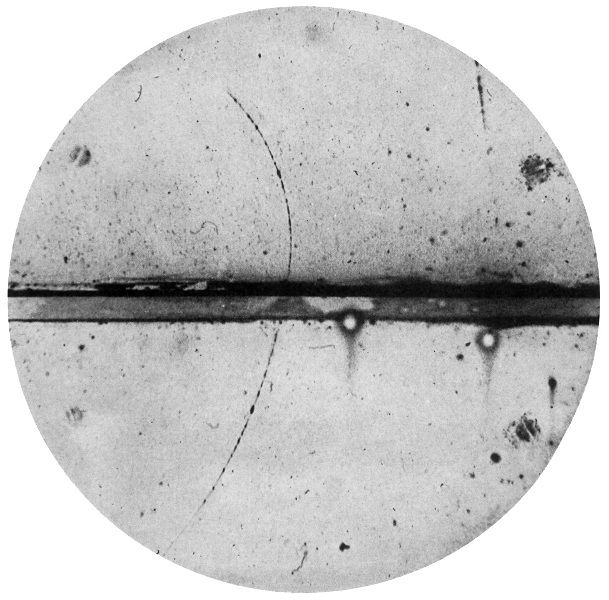 Detection of first antimatter, a positron.

As for everything in the universe, it is made up of matter which has electrons and quarks. But as we know it for each electron in the universe an antimatter particle exists which has the exact same property and mass just has an opposite charge and according to the famous equation of Einstein, E = mc², energy is equal to the matter and vice versa. But when a matter is created from energy an equal amount of antimatter is also created and if you combine these two, energy can be generated, and not a small amount of it but an explosive amount of energy from a very tiny amount. It is because, in the equation E means energy, m stands for mass, and c is the speed of light, this means that a tiny particle is capable of producing vast amounts of energy and when we simply touch matter with antimatter it results in tremendous amounts of energy. Even though we can have huge amounts of energy this way, creating antimatter is a hard process. Linear Accelerators are being used to generate high beams of electrons that are accelerated up to the speed of light then it is struck against a wall of iridium that results in the creation of anti-matter but as soon as they are born they disappear and only a minuscule amount is stored.  So how do they occur naturally with lightning?

A study published in 2017 in Japan, observed that lightning does create anti-matter and not just one but two of these anti-matters. In the study, it was described how the gamma rays react with air and other molecules to produce these anti-matters. Initially, the study was about to be conducted in 2015, however, due to lack of funding and other issues it was halted and after appealing to various members who might be interested in it and the general public, they reached their goal amount and was able to continue the study and publish the results.

In February of 2017, the team installed four detectors within the city of Kashiwazaki and saw a large number of spikes in gamma rays as soon as the lightning struck. They found that each lightning strike has three phases in which gamma rays are emitted, the initial burst, the afterglow, and the prolonged emission. 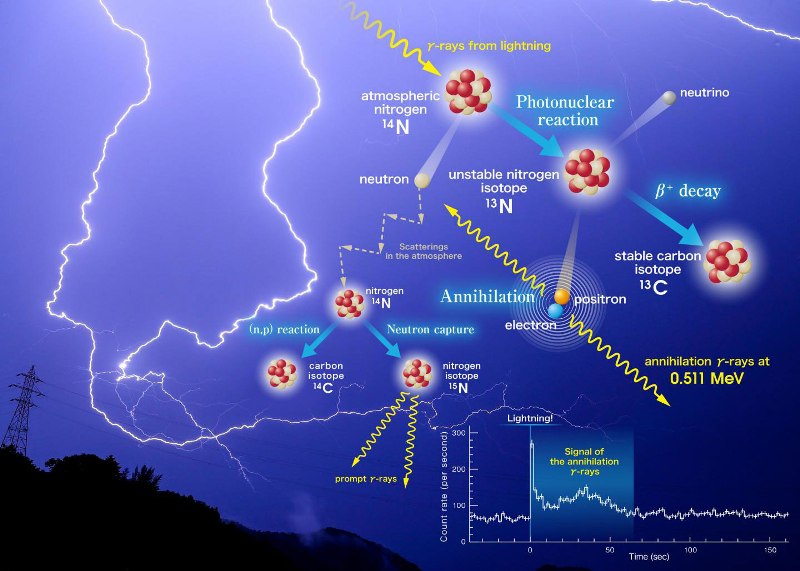 The process of creation of antimatter with lightning.

During a lightning strike, the initial phase happens at such a pace that the atmosphere doesn’t respond right away to it. Though to our eyes it seems that lightning is rushing down via an empty space, this isn’t the case. As it is extending down it is constantly colliding with other gas molecules, this causes the particles to get superheated and turn into plasma as it reaches temperatures of up to 50,000 F but it is short-lived. It is this process that we are able to see and during the afterglow, as mentioned previously the nitrogen and oxygen atoms are struck with such an energy that neutrons fall out of the nucleus. This results in nuclear fission and finally, the last phase begins. The nitrogen exists with 14 neutrons to be stable and oxygen with 16 neutrons, but as soon as the lightning strikes each molecule loses one neutron and becomes extremely unstable and they start to decay right away. As they are decaying, they release equal amounts of neutrino and positrons, which are anti-matters. The former comes to life and disappears almost instantaneously, while it is the latter one that is detected properly. Positrons are basically positive electrons, and after being born they go on to collide with their counterpart electrons to make everything stable again and during this process, they release the energy of about 0.511 megaelectron volts.

Though anti-matter occurs in nature, it extinguishes right away. Nonetheless, it was an astonishing discovery and scientists were able to detect it and know exactly how it is created. As of today, detectors are still installed by the same team and they hope to uncover more mysteries of this once thought science fiction particle.