Ah, yes grass. Our planet’s 26% of greenery comes from grass, we are literally surrounded by grass, everywhere you look there’s grass from our man-made lawns to massive Swiss grasslands. Where scenic beauty is mesmerizing, serene ambiance with Alpes in the background while cows carelessly enjoy munching on some quality grass. Growing up we were constantly told to eat green leafy vegetables, this begs the question, why can’t we eat grass? I mean it sure is green, plus cows, sheep, and goats love it. So what’s the catch?

Green grass is made of these

The chemical structure of Cellulose.

Let’s look into the chemical structure of grass and identify what it is exactly. Although grass is of many species for the sake of understanding we are focusing on Poaceae, which is the common grass that we see everywhere. It usually has three components, the root, the crown, and the leaf. The grass is made of all the elements we are familiar with such as carbon, oxygen, nitrogen, and phosphorus. Things change when we look at their proportions. The grass is basically water and cellulose, an insoluble carbohydrate made of complex glucose (a type of sugar) that lines the cell walls of plants.

Why can’t we eat it then?

Because nature says a big NO, that’s why. But seriously answers to this question are enzymes and microbes. As mentioned above, cellulose is the primary component of the grass. Although the entire plant kingdom is full of cellulose, we manage to digest tough plants such as kale is because other nutrients are present inside them that makes it easier on our stomach. Also, cellulose stops breaking down below the pH level of 5.5, while our stomach sits around 1 to 3 pH levels which is extremely acidic for grass.

So how can cattle digest it? 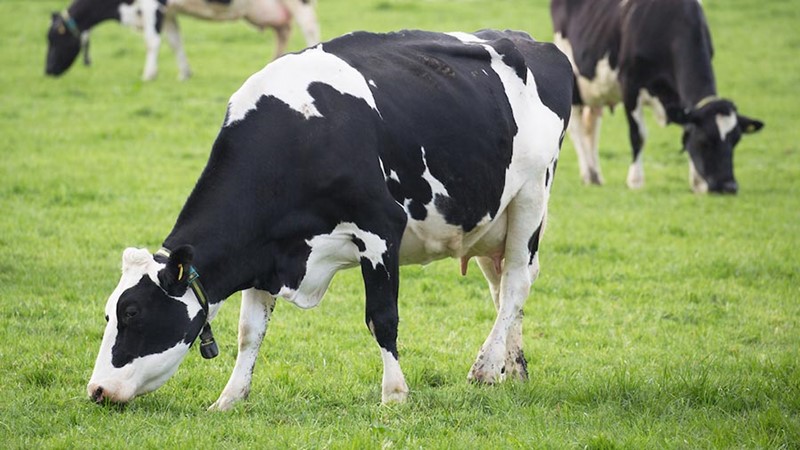 Well, it’s gross… they regurgitate. Yes, seriously. The thing about ruminants is that they have four stomachs, I don’t know if you are keeping track but that’s 3 more than us humans. The process begins as soon as the grass is being grazed, as the esophagus begins to break down the grass ever so slightly, then it travels to the second chamber where the grass is partially digested and sort of curdles in chunks like in the cheese-making process and it is called Cud.

Here’s where the regurgitation happens. Cuds are returned to the mouth where cattle can break down the grass further by constantly chewing on it. At least, we now know it’s not some mystery organic chewing gum, well technically it is but still, gross.

Followed by this, the broken down grass is again swallowed and this time sent to the first and the largest chamber of the stomach known as Rumen, hence the name ruminants. Tiny microbes reside in the rumen, which releases certain enzymes that break down the cellulose into simpler glucose while digesting it without absorbing any oxygen.

From here onwards, the leftovers are sent to the third chamber where they ferment and are later absorbed as nutrients. While the almost digested grass now is sent to the fourth chamber to get digested further, which is acidic and from here is passed into both intestines.

So there you have it, the mystery has been solved and I believe it’s safe to leave the grass to these animals to do a quadrathlon in their stomach.