Home
Science
How Earth Was Before the Dinosaurs?
Prev Article Next Article

As long as humans have been around, apart from the manmade structures Earth looks more or less the same as it was thousands of years ago. The major change in Earth’s geography came when a massive comet struck the Earth and wiped out the entirety of dinosaurs. This catastrophic event shifted major structures on the plant. But this makes us wonder what Earth looked like before the Dinosaurs. It is hard to imagine for us as we are fed with the Jurassic era constantly, but as we know life was present before it and it was not ruled by massive lizards.

It is hard to determine where to begin with when it comes to talking about life before the dinosaurs, as before them there has been an extremely long period of time where different creatures lived and our planet looks nothing like today. So let’s begin with the very beginning of the Earth.

This is where our beautiful planet began to emerge in the solar system, though beautiful is not the word that would come to mind seeing our planet during that time. 4.6 billion years ago Earth was nothing more than a sizzling piece of land with meteoroids constantly bombarding on its surface. As you can imagine no creature could exist at this time, plus having no atmosphere meant radiations were always present. Slowly it started cooling down and crust starting forming, however, around 4 billion years ago another protoplanet struck the Earth and it was nothing short of a hellish nightmare, massive debris went flying right into the vacuum of space, and Earth was once again burning, it’s said rocks were melted and then turned into vapor from this collision. This impacted the speed and rotation planet so much that a day began comprising of just 5 hours, and the debris around the Earth appeared similar to Saturn’s rings. After a while this debris finally started to take shape under the gravity of the Earth, the moon was born. This new satellite had a profound effect on our planet, the molten rocks emerge from the core splitting the Earth’s crust and this continued for some time. Finally, the moon was locked in its current orbit and the effects started to minimize and Earth began to form a proper surface. Still, it was nothing short of a picture of hell. Then gases from within the Earth, started spewing outwards, but since the gravity of Earth was present it couldn’t escape and finally, it started forming the atmosphere. This sloth pace of acid rain and toxic atmosphere continued until the next Eon started. 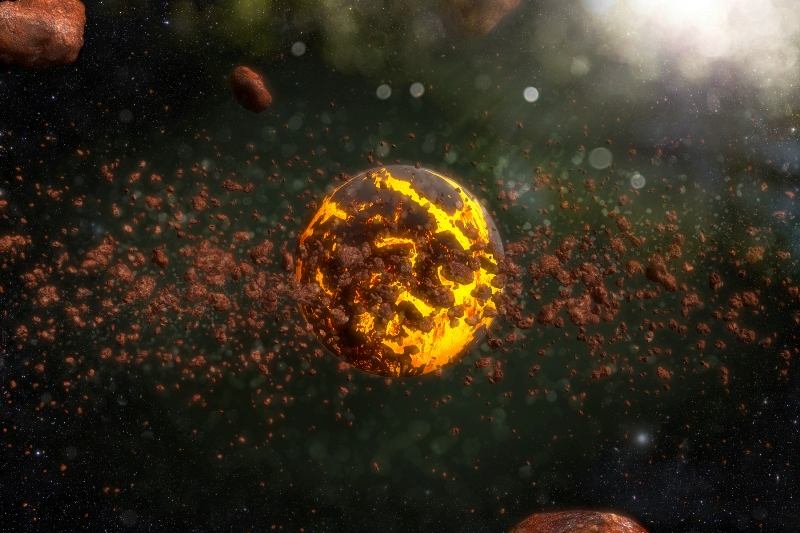 Formation of the Earth.

It was from 4 billion to 2.5 billion years ago. Here Earth saw the first form of life, not life as we see today but they were tiny microbes and their fossils can be found in Glacier National Park. At this stage, Nitrogen was the dominant gas and even in the oceans, iron was present which reacted with other elements resulting in green oceans. Around 2.8 billion years ago, tiny bacteria began emerging known as cyanobacteria that did a similar process to plants, photosynthesis. They began absorbing sunlight and carbon dioxide for food and releasing oxygen as waste. After 200 thousand years of this, oxygen was so abundant that Earth’s ocean turned red from the iron and oxygen reactions. This was the time that some scientists believe was the game-changing moment. Finally, the Earth was covered in an Iceage. This ice age resulted in the extinction of pretty much all the tiny lifeforms on Earth, however, when it finally began to melt, those who had survived were now alive on an oxygen-rich planet. 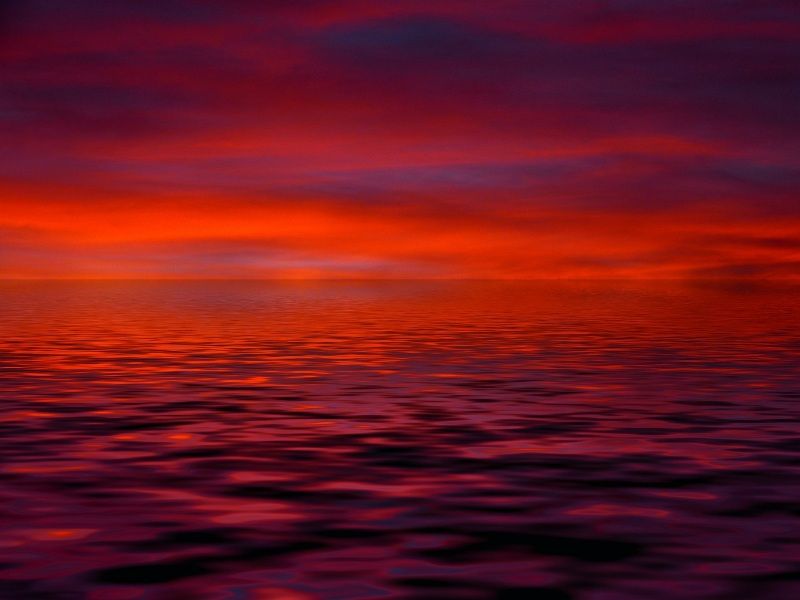 The Eon span from 2 billion years to 540 million years, here the Eukaryotes were born, organisms that had nuclear membrane around their DNA. All of this was happening within the oceans as our planet was still under the constant bombardment of ultra-violet radiation, as DNA cannot exist under UV rays, life was happening in the oceans. Finally, the abundant oxygen flew upwards and reacted with these ultraviolet rays to form the ozone layer. A couple of thousands of years later, major continents formed and the first multi-cellular large creatures began emerging around 1.5 billion years ago in the oceans. They were still somewhat basic. Then from 1,000 million years ago to 500 million years ago, complex life was flourishing in the oceans. On the land, few species of ancient plant life and minuscule arachnoids were present, but nothing else. 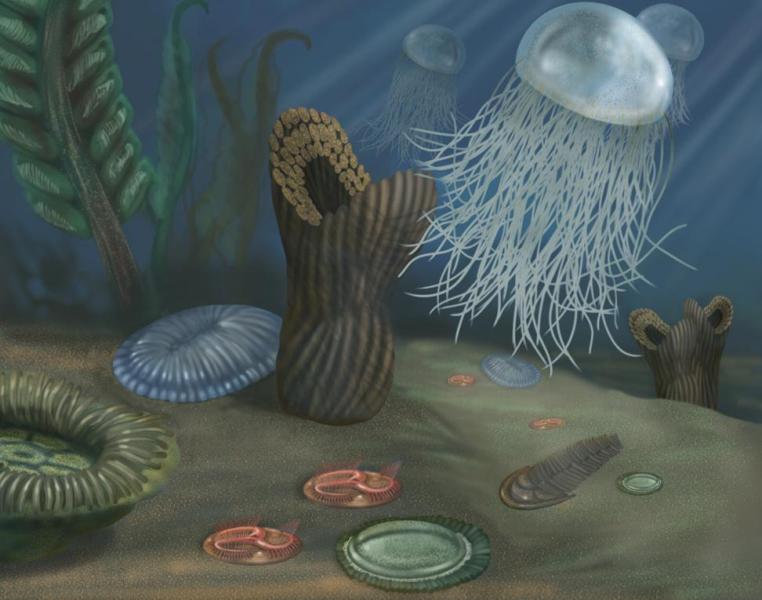 Ocean life of the Proterozoic Eon.

Around 400 million years ago, the ocean was getting crowded to say the least, as entirely of life was happening in the oceans. Plus no carbon dioxide producing creature was present on the land meaning plants were dying and washing up in the ocean, resulting in algae which were consuming precious oxygen as well. Arthropods and ancient squids were the dominant creatures here but vertebrates were existing at this point as well in the form of fish. But they were still not equipped to live on the land. As lungs and gills are not fossilized it is hard to understand exactly how these fishes began breathing oxygen from the air. A 375 million years old fossil of a creature known as Tiktaalik, which had a salamander-like body but fins, was the key to be able to drag itself out of the ocean and crawl onto the land. Finally, after many years of evolution, their fins became limbs and their entire body transitioned to be able to thrive on the land. This Eon is divided into three eras, the Paleozoic Era, Mesozoic Era, and Cenozoic Era. 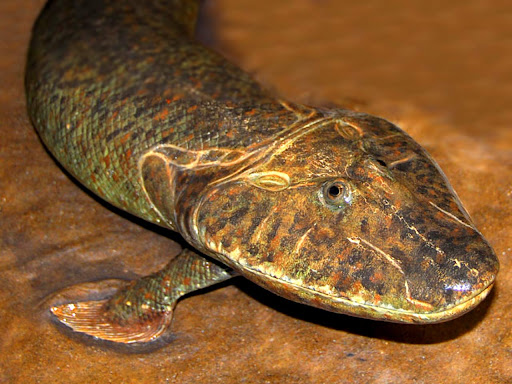 A model of the Tiktaalic fish. 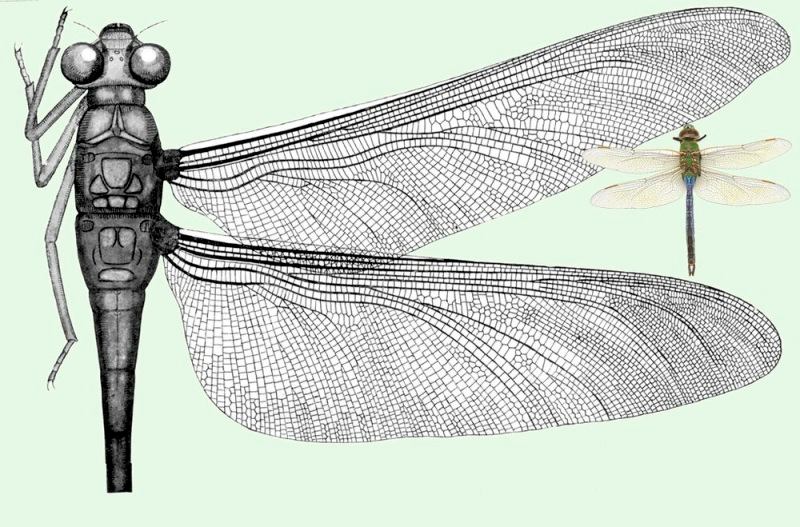 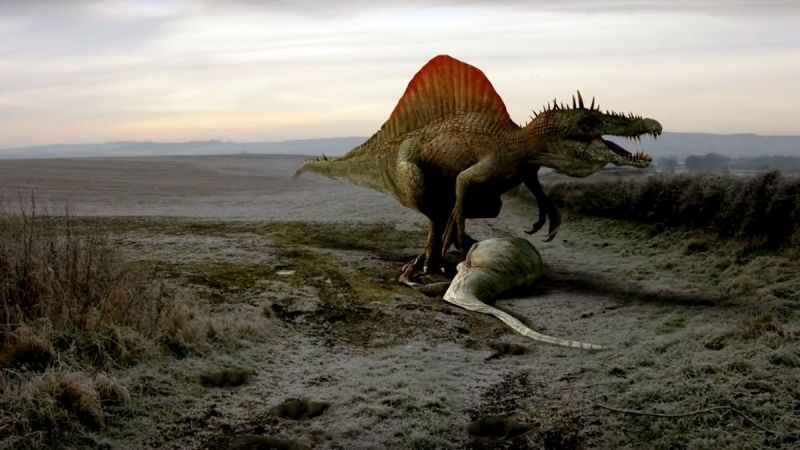 Spinosaurus after a hunt. 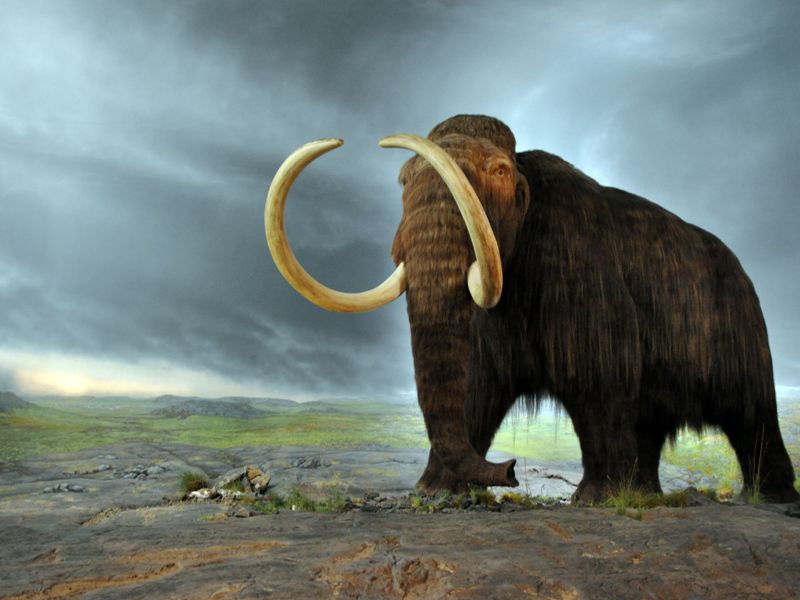 Paleozoic Era was the actual era that existed prior to the reign of Dinosaurs, and Earth was basically a swampland for the giant insects to have a good time in. Who will be the dominant species after humans? We won’t know as we wouldn’t be there if that happens.