On our planet, we have such a huge diversity of species that we can barely count them, and not to mention that we have not even discovered all of them. Though each and every species exhibit a certain trait or feature that is quite unique, among them bioluminescence is a feature that has lured both the researchers and preys to these creatures for many years. When we think of bioluminescence we think of the Anglerfish, and other deep-sea organisms, however, fireflies are the creatures that produce their own light that has been living on the planet for ages and with advanced technology, scientists were able to create glowing plant life as well.

Simply, when light is produced as a result of chemical reactions which occur within an organism it is known as bioluminescence. It falls under the category of chemiluminescence, a field of science that studies the production of light in chemical reactions. The interesting part about this form of light is that, unlike the light that is produced naturally or artificially that generates huge amounts of heat, only 20% or even a lower percentage of the light generates thermal radiation or heat. Additionally, not all bioluminescence have the same chemical compounds, as their diet and habitat influence the color that is expressed but one molecule that is common among all is Luciferase, different arrangements of it produce different light as well, for example, cyan in jellyfish. 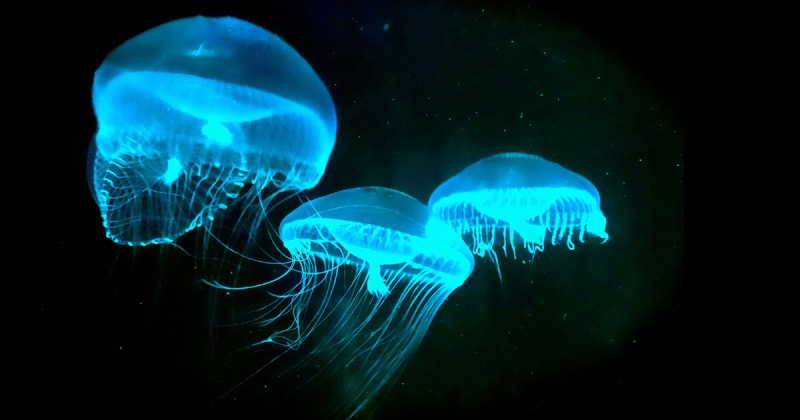 A smack of bioluminescent Jellyfish.

Like any of the physical traits in the animal kingdom, it is also used for hunting, attracting mates, or confusing the predators. However, it is not limited to these aspects, as some species which are cannot produce light on their own tend to exist with them for their own advantage. For instance, sperm whales coexist with bioluminescent planktons, these planktons are not a part of sperm whale’s diet and as a fish approaches these planktons they start to light up which alerts the whale and it consumes the fish.

Though thousands upon thousands of species of plants exist in the world, none have evolved to glow in the dark. Naturally, there might not have been a need for plants to become bioluminescent, scientists have been able to make four separate species glow and among them, the watercress was the one that lasted for up to 3.5 hours, which is astonishing. It was made possible by the same chemical that lights up each and every bioluminescent organism, that’s right luciferase. Luciferase was extracted from fireflies and another chemical known as Coenzyme A was used in the process which would help to make it easier by eliminating the reaction byproduct which inhibits the ability of luciferase to emit light. 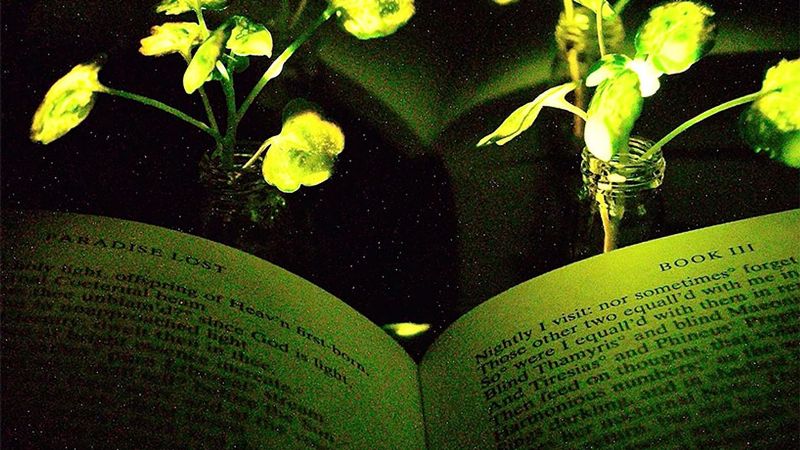 Glowing watercress with Luciferase and Coenzyme A.

The way it works is that both these chemicals are combined together as a liquid solution. Once the solution is stable and ready to be used, plants are dunked into this liquid. While simply submerging the plants into the liquid doesn’t do much, in order to make it work, pressure is applied which forces the solution into the leaves via tiny pores known as Stomata. From here chemistry does its things, and when the chemicals react slowly within the plant, they start emitting light. The light that has been produced by these plants is very low that one can’t even read under it, but the promising aspect is that scientists claim that they might be able to enhance the light-emitting properties of the plants. Not only that, they say that the glow time can also be increased by altering the concentration of the solution.

Why create such plant life?

The reason why such an idea even crossed scientists’ minds is the ever-growing light pollution. Other forms of pollution are all-time high that is not a surprise, but light pollution is not too far behind. In addition to that, about 20% of energy consumption is because of light usage, therefore, scientists say it is only logical to produce eco-friendly light emitting sources which can illuminate workspaces and institutions. As of today, offices are equipping plant life which is phenomenal but this project will take it to the next level. Though this experiment caught the headlines, it is not the first one done to produce light within plants. But the downside with the previous method was that it was extremely slow, as they were using what is known as genetic engineering. As the name suggests in this DNA of an organism is altered to produce very specific traits, as genes are manipulated scientists can achieve basically any type of plant in theory, bananas are the best example of this. 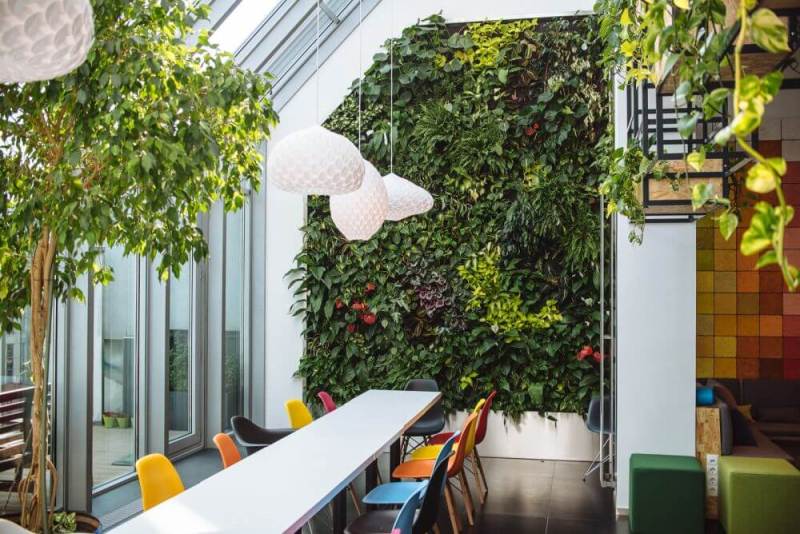 An office is full of plants.

In the past, the way these experiments were conducted was they specifically altered the plants to react with luciferase, or as the plant grows it develops its own luciferase. Unfortunately, even after all the laborious processes, scientists were only able to yield plants that were poorly lit. Genetic modification might produce naturally glowing plants but it would take over 10-15 generations, as each new generation will pick the specific trait to glow that can take ages, and still results are not guaranteed.

In a nutshell, it is safe to say that these plants will be implemented in offices and schools as light-emitting sources. Not only they don’t require repairs, but they also create a healthy environment as well.