Home
Science
Why the Membrane of Neuron is Polarised?
Prev Article Next Article 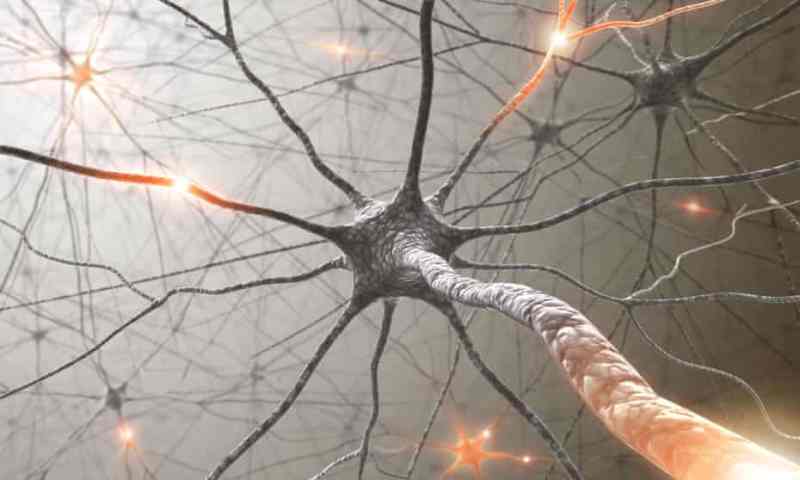 The world as we see it may appear very crowded with all the various species and structures coexisting, however, when we go to the microscopic level we uncover a whole new world of busy microorganisms and if we go even further, we start to see individual building blocks. Each time we dive deeper with a microscope we discover something new and are left with many questions as to why certain things occur, like the polarized membrane of the neurons.

Cells that exist within the nervous system are known as neurons or nerve cells. These are the basic working unit of the brain and neurons send electrical and chemical signals to other neurons, cells, muscles, or glands cells and these consist of an axon, dendrites, and a soma (cell body). The cell body holds the nucleus and cytoplasm, while the axon is extended out of the body which is split into smaller branches known as synaptic terminals. The cell body extensions, appearing as branches are known as dendrites which receive messages from other neurons. 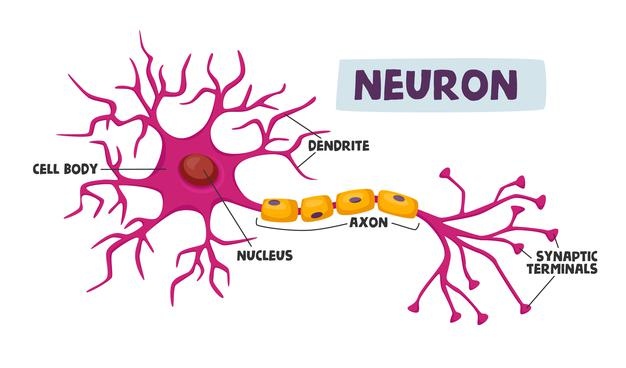 When neurons send or receive information, they transmit an electrical impulse that can be observed along the axon and these impulses can range anywhere from a centimeter up to three feet. Not all but many axons are often coated with a layer of the myelin sheath, which are sleeves of fatty tissues that protect nerve cells, these accelerate the transmission of the electrical signals.

As we know that neurons send and receive electrical signals, these electrical impulses have a domino effect. Upon receiving an impulse, a neuron must transmit it to the next to ensure that the impulse continues on the correct path. Due to chemical chain reactions, dendrites are able to pick up an impulse that’s transported via axon to the next neuron within seven milliseconds, which happens to be faster than a lightning strike. To understand the polarized state, we must understand the entire process of this transmission. 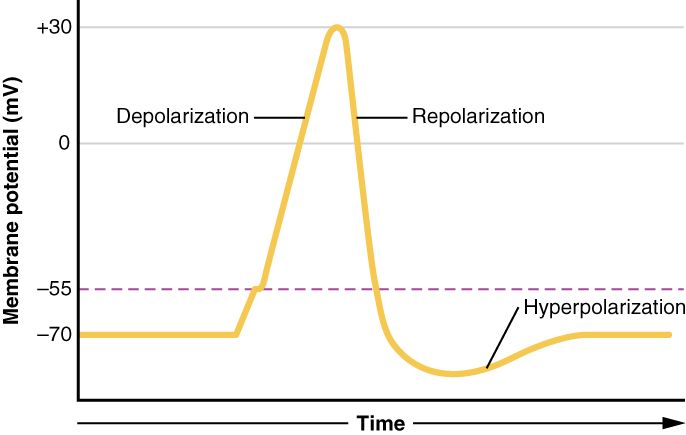 A graph showing the polarization steps of a neuron.

2. Resting Potential: As stated earlier there are times when there is no impulse to carry and during this stage when the neuron is inactive and polarized it is considered in resting potential. Neurons remain in this state until a stimulation comes.

3. Action Potential: As soon as a stimulation arrives, the mechanism that holds the sodium ions on the outside is switched off and this allows positively charged ions to come rushing inside and this changes the interior charge to positive as well. Each neuron has a certain threshold that allows it to stop or pause the incoming sodium ion but once this threshold is crossed there is no holding back the positive ions. This results in depolarization which is known as action potential and then finally the stimulation is transmitted. Once an impulse is transmitted the neuron returns to the resting potential.

4. Repolarization: As the natural state of the neuron is to remain polarized, when action potential occurs it must repolarize. In order to repolarize a neuron, the membrane allows the potassium ions to flow on the outside this restores the electrical balance. Additionally, as soon as potassium ions begin to move outside, sodium ions are once again blocked to flow inside or outside.

5. Hyperpolarization: A state that occurs when the ratio of potassium ions is higher on the outside compared to sodium ions on the inside. This results in a dropped membrane potential meaning it has more room to grow upon being stimulated. Just like the action potential as soon as the impulse has traveled through the neuron it returns to the resting potential.

6. Refractory Period: Once all of the previous steps (or some of them) are finished, the neuron enters a refractory period. In this it works to return to the original polarized state, where sodium ions start to move back outside and potassium ions return inside. During this process, the neuron doesn’t respond to any incoming stimulation. Finally, it enters the resting potential and remains this way until a new impulse arrives.

Ultimately, the impulses and the flow of ions is the reason why the membrane of neurons is polarized. If it was not polarized, nerves would simply be fried with all the incoming electrical impulses.